Farms cover about half of Delaware and food is plentiful. 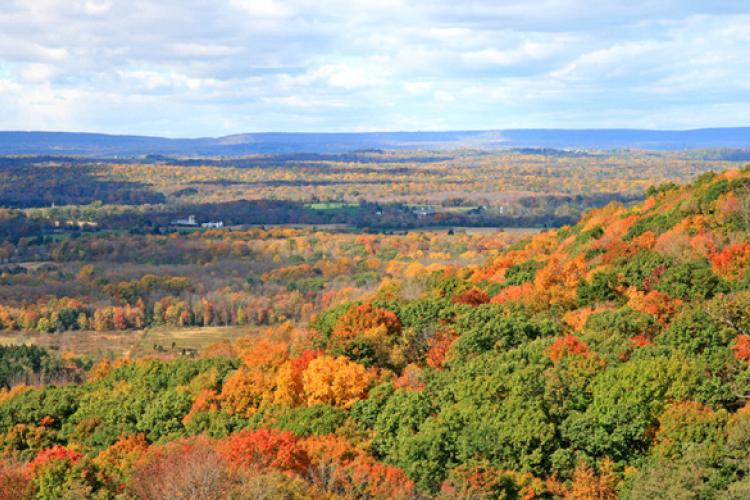 In 1610 Samuel Argall, a British sea captain took shelter in a bay there when he was blown out of course during a storm. He named the bay De La Warr after the first colonial governor of Virginia, Thomas West, Lord De La Warr. The name came to be spelled Delaware and was also given to the Delaware River, to the Delaware Native Americans, who called themselves the Lenni Lenape, the original people. Eventually, it became the name to the state of Delaware.

Most of them are found in the south, located "below" the Chesapeake and Delaware Canal. Many farms raise chickens, Delaware's most valuable farm product, turkeys and eggs. Since chicken and turkey are so available, fowl dinners are common fare for Delawareans.

Today, broilers are chickens between nine and twelve weeks of age.

Cecil Steel, a woman from Ocean View, started the states huge chicken industry in 1923 by accident. She received 500 chicks instead of the 50 she had ordered in order to provide eggs and meat for her family. She decided to keep them until they were sixteen weeks old, to butcher and market at that time - which was considered a young age to butcher a chicken by that time standards. Cecil called her chickens "broilers" because they could be cooked quickly. The broiler industry was firmly established in Delaware within the following decade.

Farms also grow fruits, vegetables, and grains, such as apples, peaches, soybeans, corn, and wheat. Peaches were a main crop in Delaware until late 1800 when they were blighted. The motto has been revived and, to some extent, the peach crop.

The fishing industry is large. Fishermen's catch includes crabs, clams, oysters, sea bass, and weakfish, the state fish. Not surprinsingly, steamed crabs are a favorite food in Delaware. However, the local meal that includes raw blueprint crab, raw oysters and steamed clams may raise one or two eyebrows. Try it because it is great. Newspapers act as table cloth and the seafood is spreaded across, ready to be cracked and eaten, and pitchers of cold beer liberally distributed among them.

Enjoy the Pumpkin Chunkin, Sussex County, celebrated the weekend after Halloween, and the Apple Scrapple festival, Bridgeville, during the second week in October.

Delaware earned its nickname because it was the first state to approve the US Constitution.

Capprioti's, in Wilmington, and try its turkey subs. The port in Wilmington, Delaware, sees the arrival of more banana crops than any other port in the USA.

Any of Grotto's Pizza restaurants. This is a popular local chain said to have begun in Rehoboot Beach.