Cumin flavors fish, meat, couscous and vegetables in Middle Eastern cuisine, essential ingredient in most Indian curry powders or in chili powder from Mexico, where it also makes an stellar appearance in sauces, with chicken, pork and enchiladas.

Whole or ground, cumin flavor, which is aromatically spicy rather than hot, is an essential ingredient in most North African, Middle Eastern and Indian cooking. It is also used in Spanish and Portuguese cuisine, to flavor sausages, rice, and stuffed vegetables.

Cumin is the most prominent aroma in a Moroccan bazaar, flavoring most of the kebabs roasted outdoors. It is strongly associated with most of Middle East bean soups or couscous. In India cumin is used in most curry powders and innumerable dishes, as well as in a refreshing drink made with tamarind water. This spice is widely used in Mexican and Tex-mex cuisine. Cumin will also flavor some Dutch cheeses and sausages in Spain and Portugal.

Cumin dates back to the Old Testament and it is mentioned Several times in the Bible. It was as widely used in ancient times as it is today. Old legends say the plant has the power of keeping lovers from straying.

How to Identify cumin

Cumin is a plant in the parsley family. The plant is a trim annual herb growing up to 10 in (25 cm) with thread-like leaves. Small clusters of very light pink flowers come out in early summer. Originating in the Nile valley, it has since been introduced into other parts of Africa, and into India, China and the Americas.

Cumin dried seeds are the part used for seasoning. They are shaped like caraway seeds, very aromatic and with a slightly nutty flavor. Cumin seeds come in three colors:

Amber and white seeds are very similar, but the black seed has a sweeter, heavier, more piquant flavor.

How to use and store

The seeds are available whole or ground. Buy whole and lightly roast before using or grinding. Ground cumin loses flavor and aroma within a few weeks. Following general guidelines for herbs and spices, it should be stored in a cool, dark place for not more than six months.

Remember that lightly roasting the seeds in a dry frying pan before using brings out cumin's interesting flavor and aroma.

Used in a wide variety of North African and Middle East dishes, to flavor meat, fish and chicken, and vegetables, especially eggplant. In India is used in curries and spiced dishes, including yogurt relishes, snacks and cooked vegetables. In Mexican cooking, combined with chili, as in chili con carne, and added to chili powders and pepper sauces. Cumin is used today as one of the ingredients of curry powder and as flavoring for chili sauce, cheeses, and pickles, and kummel liqueur.

Cumin prefers hot climates, but it can be grown in northern regions if started in a heated greenhouse or under glass. The plant takes about four months to mature, therefore sow seeds in early spring and transplant later to well-drained soil in a sunny position. Seed heads should be harvested as they begin to change color. Hang them in paper bags, to ripen, in a dry, airy place.

There is authentic Middle East flavor in chickpea puree or couscous salad. A very unexpected flavor for those not used to Anglo-Indian cuisine is that of mulligatawny soup.

Cumin goes well with sausages; try it in your next sausage casserole. Bring Morocco to your backyard and for your next barbeque, spread the meat with a spice mixture of cumin, turmeric, ginger, peppercorns, garlic, onions, and parsley before grilling.

If a recipe calls for cumin, and there is none at hand, substitute 1 tsp ground cumin seeds with: 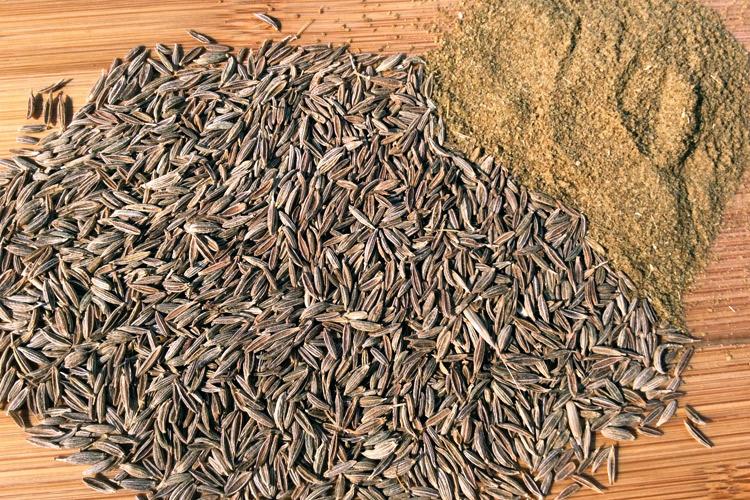