This popular Malayan fruit can be roasted, baked, or fried. It tastes like bread and can be substituted for starchy ingredients like rice.

Breadfruit is a type of flowering tree closely related to the mulberry family. Breadfruit is one of the highest-yielding food plants, with a single tree producing upwards of 200 or more fruits per season. In the South Pacific, the trees yield 50 to 150 fruits per year, however, in southern India, normal production is 150 to 200 fruits annually.

The ancestors of the Polynesians found the trees growing in the northwest New Guinea area around 3500 years ago. They gave up the rice cultivation they had brought with them from ancient Taiwan, and raised breadfruit wherever they went in the Pacific. Breadfruit then spread west and north through Southeast Asia.

Sir Joseph Banks and others saw the value of breadfruit as a highly productive food in 1769. As President of The Royal Society, Banks offered fame and fortune to anyone who could successfully introduce the breadfruit crop to Britain. William Bligh was appointed to the task, and after surviving a mutiny on the first trip, a second expedition was successful in returning with hundreds of live breadfruit plants.

The wood of the breadfruit tree was one of the most valuable timbers in the construction of traditional houses and furniture in Samoan architecture. Although the wood is not very hard, it is strong, pliable, and termite resistant. The lightness of the breadfruit tree wood makes it perfect for making surfboards. The wood is also used to make traditional Hawaiian drums.

Breadfruit can be eaten once cooked, or can be further processed into a variety of other foods. A common preparation, at least outside the United States, is to take fermented breadfruit and combine it with coconut milk and baked in banana leaves. This is similar to a rice pudding in texture and taste. Whole fruits can be cooked in an open fire, then cored and filled with other foods such as coconut milk, sugar and butter, cooked meats, or other fruits. The filled fruit can be further cooked so that the flavor of the filling permeates the flesh of the breadfruit.

If you get a chance to try breadfruit, you will not be disappointed. Not only is this amazing fruit extremely tasty, it is also highly filling. So, don't let your eyes get bigger than your stomach; be sure to share this tasty treat with your friends. 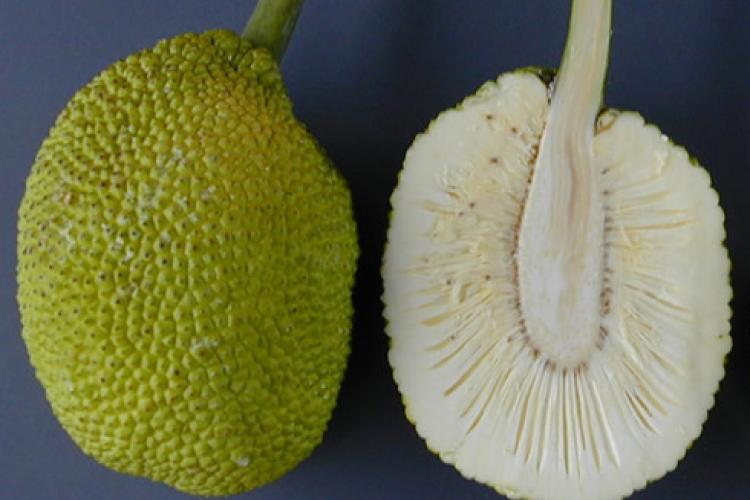 Although not very well known in Western cooking, it is used in warm climate countries in the Pacific Ocean.

This popular Malayan fruit can be roasted, baked, or fried. It tastes like bread and can be substituted for starchy ingredients like rice. What else can this strange-named fruit do?

The breadfruit holds a treasure chest of nutrition, most notably being rich in fiber. This fiber can help control diabetes and even lower bad cholesterol levels, decreasing the risk for heart attacks. It is currently recommended that adults consume 20 to 35 grams of dietary fiber per day, which is equivalent to two cups of boiled breadfruit. Consider replacing white rice in meals with breadfruit to boost your dietary fiber easily. Breadfruit can also provide a proportion of the recommended requirements for vitamin C, thiamin, riboflavin, niacin, phosphorus, and iron.