Not only is a cucumber a refreshing snack on a hot day, it is also very versatile.

The cucumber has often been considered the “Green Goddess” of the home garden, this cooling vegetable is a long time favorite for many reasons. Let's take a look at a few facts about this humble garden favorite.

Cucumbers are oblong, dark green, vine-growing members of the gourd family, belonging to the same biological group as the cantaloupe, watermelon, pumpkin, and zucchini. There are several different varieties of cucumbers, including dwarf, standard, and pickling cucumbers that are used in different recipes and as side dishes or salad ingredients. Along with these uses, you'll find cucumber as an ingredient in an increasing number of skin care products.

Cucumbers are the coolest in so many ways

This vegetable is said to be native to India, and has been cultivated for as much as 3,000 years in Western Asia. Cucumber cultivation later spread to Greece and Italy, and believed to be embraced especially by the Romans. Later, cucumbers were introduced to China, and spread throughout Europe most likely by the Romans. There are records of cucumbers being grown in France in the 9th century and England in the 14th century. The first recorded appearance in North America seems to be around the mid 16th century.

Cucumbers have had their ups and downs. During the 1600s, there grew a concern that eating raw fruit and vegetables caused a variety of illnesses sometimes referred to simply as the “summer diseases.” Many so called experts on health claimed these uncooked garden produce unsafe, especially for children. Although a strong revolution took hold around the same time to eat simple healthy foods (credit sometimes given to the Quakers), the poor cucumber still suffered from the raw vegetable prejudice. Thus the name “cowcumber” stemming from the notion that raw cucumbers were “fit only for consumption by cows.” Now, of course, the cucumber is revered in even the poshest of spas!

One of the cucumber varieties is called Burpless, a commercially-grown, seedless alternative to other varieties that are reported to cause gas in some people. Another variety is the pickling cucumber, which are also commercially grown to produce uniform-sized cucumbers used specifically for pickles.

If you think someone sitting around with cucumber slices on their eyes is a bit strange, think again. Cucumbers really do reduce swelling of eye tissue. And cucumbers are not just mentioned in fancy spas or in your favorite salad. Even the Bible has information regarding this widely available food in ancient Egypt (Numbers 11:5).

Cucumbers are easy to prepare and enjoy. Most of the time they are included raw in recipes, but they can be cooked as well. You can remove the seeds if you slice the cucumber lengthwise and scoop them out with a spoon. Store-bought cucumbers are often waxed, so be sure to peel them before eating them.

There are, of course, a number of cucumber salads that use vinegar, yogurt, or other creamy dressings. You can puree cucumbers and other vegetables into a hearty cold soup such as gazpacho. You can also stuff them with a combination of cream cheese and horseradish for a delicious summer treat. Some people even create sandwiches using cucumbers with cream cheese, mayo, vinegar, and Worcestershire sauce.

Don't forget about the relish, salsa, and pickle recipes available as condiments or side dishes. Many people enjoy pickling their own cucumbers at home, for more organic, true flavor and less preservatives. You can even make jelly from cucumbers, bake them in the oven with herbs and butter, saute them with a light panko crust, or create a delicious, rich tapenade with anchovies, capers, olives, and snack crackers. The best way to utilize cucumbers is to experiment with recipes that call for vegetables that add crunch, but don’t dominate the dish.

When they say “cool as a cucumber” they aren't kidding. This is one vegetable that refreshes in so many ways. Whether you're laying a slice on your eyelids and relaxing, or nibbling on a yummy salad, cucumbers are a very cool customer!

If you don't have it, there is no substitute for sliced cucumber in salads or sanwiches, although thinly sliced white onion could give a similar texture, the flavor would not be close. For cooking, substitute 1 cup cucumber with 1 cup zucchini. It would be slightly less sweet.

The American garden cucumber is best for slicing. Remove seeds from older cucumbers before using. The English hothouse cucumber is nearly seedless and less bitter than the American variety. 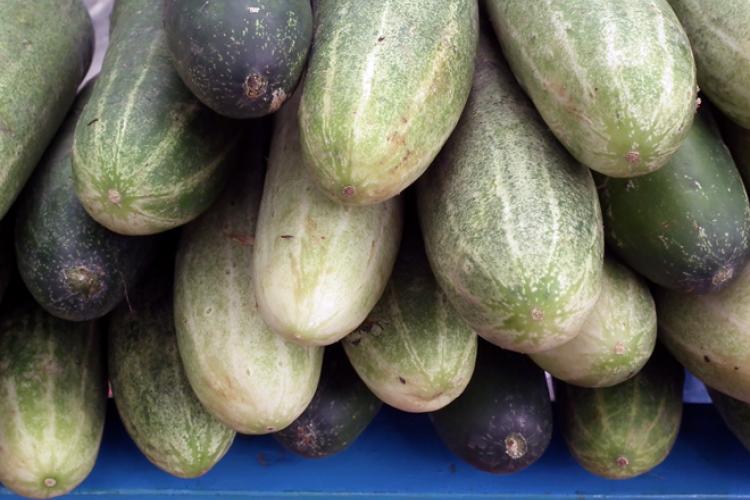 Cucumbers contain silica, which is a vital component of our body's connective tissues (cartilage, bones, ligaments, tendons, etc). Cucumber slices and juice are also used to treat various types of swelling of the skin and eyes. They also contain potassium, magnesium, and vitamin C, which are important ingredients indicated in regulating blood pressure.

Cucumbers also contain fluid that increases the ability to absorb fiber. The high water content of the vegetable is said to benefit healthy skin and complexion overall. It is also one of the best-known diuretics, promoting the secretion of urine and helping with a number of diseases of the liver, kidney, pancreas, and bladder. Even though some say because of their high water content they don't offer much nutrition, this would definitely contradict that assumption.

Choose cucumbers with firm flesh and smooth, bright skin. Discard if skin is shriveled or the fruit has soft spots.

Whole cucumbers can be stored in the refrigerator for up to ten days inside of a plastic bag.

Wash thoroughly and peel if waxed, no need to peel if un-waxed. Store cut cucumbers in the refrigerator for up to 5 days, wrapped tightly in film.