Corn has many possibilities as a grain. It is no wonder corn is such a mainstay in our diet.

Corn is the well-recognized product of stalks growing tall in vast fields that reach the horizon. The layers of broad leaves are the germinating environment for the ears themselves, and as the corn grows inside this cocoon, male and female flowers mature and release pollen as the entire plant matures. The type of corn used for grain harvested when fully ripe, dent stage, when the kernels are dry and all sugar has turned to starch.

In the United States, corn is the leading field crop by a two-to-one margin. We know what corn on the cob looks like. But, this summer picnic staple has a bigger audience than that. Corn is used to produce everything from fuel alcohol for a cleaner burning gasoline, to butters, cereals, soft drinks, and snack foods. It is also grown as feed for livestock.

Corn or “maize” has been grown since prehistoric times by some of the earliest civilizations in our world's history. Mayan and Olmec cultures were among the first to cultivate corn in the southern part of Mexico, and the crop began to spread through the Americas by the year 1700 B.C.

When Europeans began to travel to and settle in the Americas, they traded corn with their mother country, and corn began to be a well-known staple of diets around the world. Today, corn is produced on every continent in the world except Antarctica.

You can get creative with corn. Of course, dried cornstalks are often bundled and used to decorate homes and businesses during the fall. Also, a corncob can be treated and hollowed out to make pipes for smoking. Some farmers plant varieties of corn that grow very tall in order to create mazes for the sake of entertainment.

Scientifically speaking, the name for corn is “zea mays” which leads us to the word “mabiz,” the traditional name by which the Native Americans called this crop. However, many cultures throughout the world have cultivated corn and called it maize, a variation of the word. The colors of corn may surprise you. We normally see sweet corn on the table in shades of yellow, but corn is grown in a variety of colors which include red, purple, blue, and even pink. Some of this corn is strictly ornamental, but some is edible, too.

Dried corn kernels are milled to become cornmeal, which comes in different textures: fine, medium, and coarse. Corn flour is finely milled cornmeal, usualy white or yellow. Cornmeal, or corn flour, can be stored almost indefinitely in an airtight container, in a coool, dry place. This is so because modern corn mills use huge steel rods that remove husks and germ completely.

Water-ground or stone-ground corn - corn milled by the traditional method - is more nutritious because it retains some of the husk and germ, but it does not last long. Store water-ground corn in the refrigerator for up to 4 months.

Store cornstarch, hominy or corn grits in an airtight container, in a dark, cool, dry place. Hominy can also come as canned and ready-to-eat.

The most common variety of corn is either the yellow corn or the white and yellow combination colored corn. You may find a variety of colors in your region, including black, blue, and violet. These darker varieties generally contain more antioxidants and protein levels and less starch than lighter color specimens. If you can't find fresh ears of dark colored corn, check out the blue corn chips. These are increasingly popular and make a beautiful, and nutritious, snack.

Corn is a staple food in many countries. It is made into tortillas in America, into polenta in Italy, and flaked as a breakfast cereal, particularly in the United States.

Cornmeal is used mainly for baking, from corn bread to muffins. Corn flour, finely milled cornmeal, is used to make bread, usually mixed with other flours. A special type of corn flour, known as masa harina, is used to make tortillas.

Cornstarch is the finely milled endosperm of corn. It is used as a thickener for puddings, soups and sauces. Dissolve cornstarch with double the amount of cold liquid before mixing into the hot liquid to avoid lumps.

Hominy is dried corn kernels from which the hull and germ have been removed, mechanically or by soaking in lye. It is used as a side dish or for casseroles. Use dried hominy as you would use beans, washing and soaking for 8 hours, or overnight, discarding water before boiling the kernels. Hominy can be ground to make hominy grits.

Boil corn grits or hominy grits with water or milk to make a delicious breakfast cereal, or serve as side dish with a roast.

Use dried cornbread crumbs for poultry stuffing. Moist and season as you would with wheat bread crumbs.

If you don't have yellow cornmeal, the best substitute is the same amount of white or blue cornmeal. If still none of those are at hand, substitute 1 cup cornmeal with:

If you don't have corn flour, process cornmeal in a blender or food processor until the desired texture is obtained - 1 cup cornmeal should yield 1 cup corn flour substitute.

1 tablespoon cornstarch will thicken 1 cup of liquid. If you don't have it, substitute 1 Tbs cornstarch with:

Popcorn is a delicious snack that can be prepared in savory or sweet flavors. Popcorn is prepared with corn varieties - such as zea mays eventa - grown for their popping potential. There are many possibilities when cooking with corn.

Corn has many possibilities as a grain. It is no wonder corn is such a mainstay in our diet. With so much versatility, nutrition, and deliciousness, corn is going to be around for a long time.

Corn can become cornmeal, corn flour, cornstarch, grits, hominy, corn oil, corn sugar, corn syrup, bourbon, corn whiskey, and more. Corn is a wonderful food. The silk is used to make medicinal teas, the husks are used for cooking in dishes such as tamales, the kernels are used as food - either vegetable or grain - and the stalks are used as fodder. Nothing goes to waste.

Corn's most significant contributions for our health is as a source of vitamins B1, B5, and C, as well as folate, manganese, phosphorus, and dietary fiber. Folate helps reduce the risk of birth defects, heart attack and colon cancer. The B vitamins support memory function which can reduce the onset of Alzheimer's Disease.

A diet rich in whole grains, such as the grain processed from dried corn - cornmeal and cereals, for instance - is also generally assumed to have phytonutrients to ward off disease to our organs and vital tissues. Eating corn has been long believed to add much needed fiber to our diet. That fiber can come from eating sweet corn or cornmeal.

The most common variety of corn is either the yellow corn or the white and yellow combination colored corn. You may find a variety of colors in your region, including black, blue, and violet. These darker varieties generally contain more antioxidants and protein levels and less starch than lighter color specimens. If you can't find fresh ears of dark colored corn, check out the blue corn chips. These are increasingly popular and make a beautiful, and nutritious, snack.

Corn is also gluten free, so cornstarch, or corn flour, can be used as flour substitute for a gluten free dish. 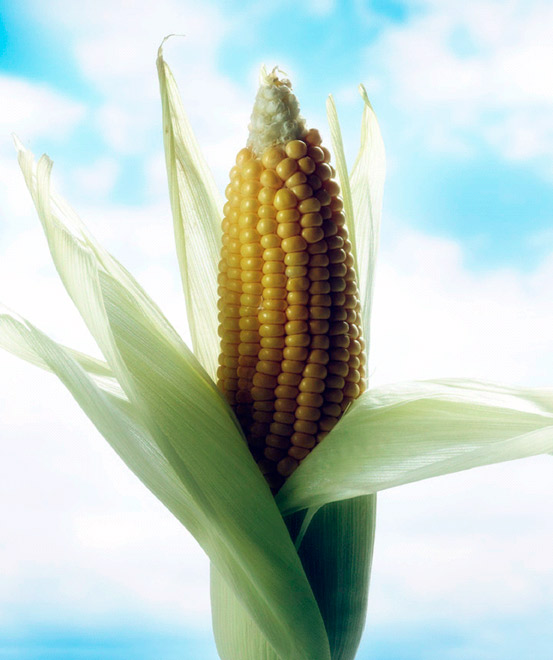