Food in Minnesota is often a hot dish or lake fish.

Although farms produce primarily sweet corn, wheat, soybeans and apples, Minnesota is first among the states in the production of sugar beets. Minnesota is notable for its wild rice. Wild rice, not really rice but the kernels of a grass that grows in shallow lakes, was first harvested by Native Americans and so it is known as Indian rice. Native American groups still harvest wild rice with their canoes by late summer.

It is also a major producer of milk and dairy products. Livestock raised in Minnesota include beef cattle and hogs. Commercial fishing is an important industry and boats on Lake Superior catch freshwater fish such as walleye pike or trout.

Pancake syrup using maple syrup and cane sugar syrup was first invented by Patrick J. Towie, a St. Paul grocer who wanted to give people the flavor of maple syrup without the high price. He gave his syrup the name of Log Cabin to honor his boyhood hero, Abraham Lincoln, who spent his childhood in a log cabin.

Wild rice soup is a Minnesota classic. The soup is made with wild rice, a type of grass that is native to the state, and typically contains chicken, vegetables, and cream. Wild rice soup is hearty and filling and perfect for a cold winter day.

Tater tot hotdish is another Minnesota staple. The dish is made with tater tots, ground beef, vegetables, and cream of mushroom soup. It is simple to make and can be easily tailored to feed a large crowd.

Walleye pike is a type of freshwater fish that is native to Minnesota. The fish has a mild flavor and flaky texture and is often pan-fried or baked. Walleye pike is a popular choice for fish fries and other casual gatherings. Walleye pike is served everywhere, not only family dinner tables, but from small dinner tucks to starred restaurants. It is normal to find offers of "all the walleye you can eat" in some of the restaurants.

Many Swedish and Norwegian immigrants, and other Scandinavians, settled in Minnesota. Although not so popular as before, there are many Scandinavian traditional dishes still on the menu. Lutefish, cod soaked in lye and then cooked, and lefse, crepes eaten with butter and cinnamon, continue to be served, mainly at Christmas.

Lefse is a traditional Norwegian flatbread that is popular in Minnesota. The bread is made with potatoes, flour, butter, and milk, and can be served sweet or savory. Lefse is often eaten as part of a holiday meal, but can also be enjoyed year-round.

Krumkake is a Norwegian cookie that consists of two thin wafers filled with whipped cream or pudding. The cookies are rolled into cones and then dusted with powdered sugar. Krumkake are typically served around Christmas time but can be enjoyed any time of year

People will take a "hot dish" to a picnic or potluck dinner. This is a casserole with varied ingredients, and each family may have their special recipe.

The State Fair and the Winter Festival are not strictly food events but events with great food, and much eating and drinking.

Wild rice and chicken soup, the staple soup, is a wonderful and comforting soup for chilly days,

Lefse is also served in Minnesota, as well as North Dakota. 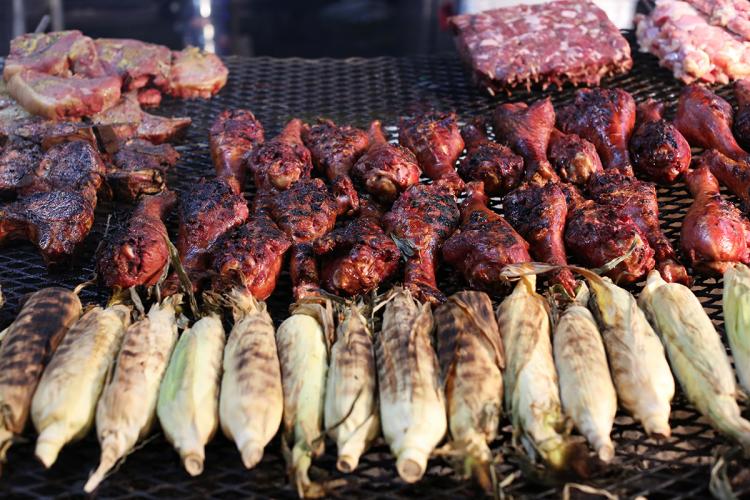 If in Minneapolis or St. Paul, visit the Farmer's Market on East Fifth Street in St. Paul, on Saturday or Sunday, to find fresh produce and enjoy the array of smells, and many quaint restaurants in Lowertown.

The word minnesota comes from the word for "sky-tinted water" or "water that looks like the sky" in the Dakota Sioux language.

The first Europeans to visit Minnesota were probably French fur traders during the 1650s.