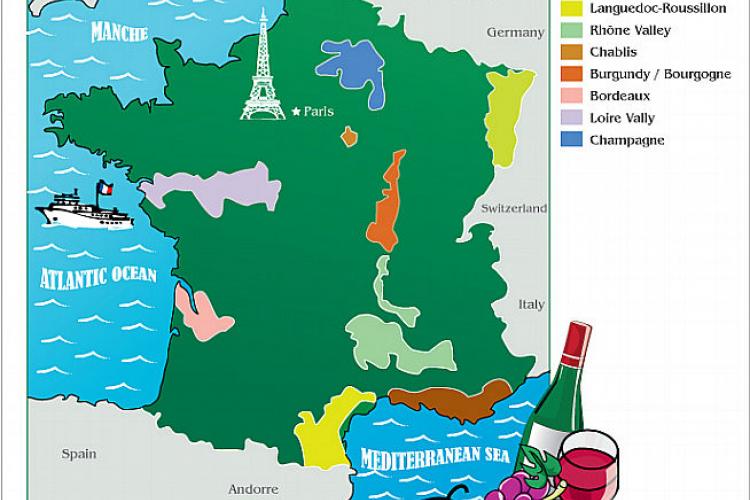 France is the country to beat in the wine producing world, an indisputable leader with global influence. Other lands have advanced great lengths and some are coming close to certain French wines, but no other has the climate and terrain to produce such an impressive and varied selection of great wines.

It is still the gold standard for sparkling, white, red and dessert wines. Most of the noble grapes and celebrated wine styles started in France. The love for Cabernet Sauvignon began with red Bordeaux. Burgundy inspired the world to try all those Chardonnay and Pinot Noir. What can we say about Champagne and all those sparkling wines? It is amazing how many international wines had their origin in a French vineyard!

France bases its reputation in the ample range of top quality wines it produces. However, there you will find also medium quality, not-so-great wines and low-level table wines worst than the cheapest plonk.

Although France is still the world's biggest wine producing and consuming country, it has problems. Exports are declining as other countries come of wine age and are taking over traditional French markets. Consumption at home is declining and France is facing over production as there is not such a large demand for its wines any more.

Wine in the French regions

Is the world still in love with French wine? It is still very much but it does not have the same appeal as it used to. French vineyards, wine merchants and producers are facing enormous challenges.

Consumers have changed. Most people now prefer younger, fruitier wines, where they can taste the grapes. Wine is bought more for immediate drinking than aging and storing and there is an increase of casual drinking, and not necessarily with food... French wines have traditionally been paired with food and don't taste the same on their own; many are too complex for casual drinking.

The emphasis on terroir and their classification system make French wine difficult to understand. Although Vin de Pays may state the grape on the label, historically, French regulations for the appellation system have forbidden the mention of the grapes on the label. Who knows Chablis is made from 100% Chardonnay and Burgundy is 100% Pinot Noir? Only the initiated, it is not something you find in the label. Alsace is an exception.

These may be part of the reasons - together with high prices in increasing competition from New World wines - why exports are declining. But domestic consumption has been reduced to about a third of what it was 100 years ago. Why?

Big name wines have become international, extremely expensive and out of reach for most consumers. Even lesser know French wines may seem expensive compared to New World ones.

Food wines tend to be lower in alcohol and higher in acidity.

French wines, particularly the red, have been always aged. A Bordeaux wine was rarely released before it was 5 years old. Mature wines have a style that is completely different from young wine. French wines have always been food wines, to be drunk with lunch or dinner. New World wine characteristics are often preferred for casual wine consumers.

French wine regulations are based on terroir. The grapes to be planted, yields and production have been heavily regulated but it was regarded as unimportant to mention the grapes on the label. The regulations and labels may help to know almost to the vine where the grape has grown but not allow any mention of this grape on the bottle. This makes it difficult for French wines as many consumers today buy wine by the grape type. French producers have also been reluctant to have back labels explaining the wine characteristics and food suitability.

The higher Appellation d'Origine Controlée system is highly regulated and has many subdivisions. However, the producer classifications, often historical, are not necessarily a guide to quality.

Within the AOC, there is a Vin de Pays boarder regional classification that allows for some modern techniques- allow added tannins or oak chips, higher yields- and can carry vintage, grape types.

French wines need to understand the consumer's new tastes and have the flexibility to produce wines that meet those needs. They also need to be simple to understand and price themselves for the supermarket or store shelf, as a great deal of wine is bought for immediate consumption, at this kind of shop and in a special offer.

Fine wines seem to be immune and prices for the leading Bordeaux or Burgundy producers seem to increase each year, often driven by investment buying.

The areas labeled as Vin de Pays are growing because they are not so bound by regulation and have lower prices.

Producers in the middle need to reduce costs - difficult because of unions and labor regulations - and find new markets.